You are here: Home / Visual Marketing / Designers are strong people

In the past I took part in a lot of rebranding presentation and I remember one in particular. I was on the client part so I will try to step outside the role that I had at that moment and present to you another idea that has crossed my mind during the meeting.

The agency began the presentation. The customer stood there listening. After the agency finished, the customer started his “presentation” on the basis of the project made by the designer. He was fiddling, going back and forth, that’s not good, that’s good but not quite, what if, I would do it more like, how do you see that.

These were words I’ve heard more than a dozen times about the design.

In those moments, outside the context, I looked at the face of the designer and saw the look in her eyes. As if I could see that her mind was filled with thoughts wanting to be heard, that she could say more about the project, but couldn’t. She had to sit, listen, take notes and redo everything.

The next day I called the agency and after the feedback I sent I felt the need to tell the account manager to tell the designer on my behalf that she did a great job and that I thank her for everything she did.

Now, you see, designers are the people who must always be up to date with what’s going on in the visual world. Furthermore, to think one step ahead of this present moment. They need to know what’s going to be worn tomorrow and how it will be worn. In their minds it’s a real battle of ideas and lines. Of color and identity. And whatever they do, from all this fight a clean picture where nobody gets hurt and everyone is happy must come out..

But how strong are designers? Very strong.

Because after presenting their work they must be prepared for a feedback. Any type of feedback. From the look in their eyes, the movement of their lips, their hands, to ALL the words coming out of the mouth of the one who sees and “talks” about the design. To take all the feedback, to introduce it in their mind, process it in creativity and lay it on paper as simple and beautiful as it can be. Yes, saying it is easy.

But think about what’s going on in their hearts when their design is criticized by someone who has no connection with design, who hasn’t drawn a flower once in their life or never stepped foot into an art gallery. When “the critic,” says that he wants a bright red next to blue or a leaf near the wood.

Whyyyyyyy? Just so, to see for himself how it looks. And even at the designer’s insistence that it wouldn’t work, he still wants to see it, that’s what he pays the designer for, to do it according to his money.

And the designer is strong, puts red next to blue, the leaf next to the wood and the customer no longer wants it that way.

Therefore, all I want to say is that designers are strong people.

Bellow you can find an infographic where we put together an 11 characteristics on the modern designer. 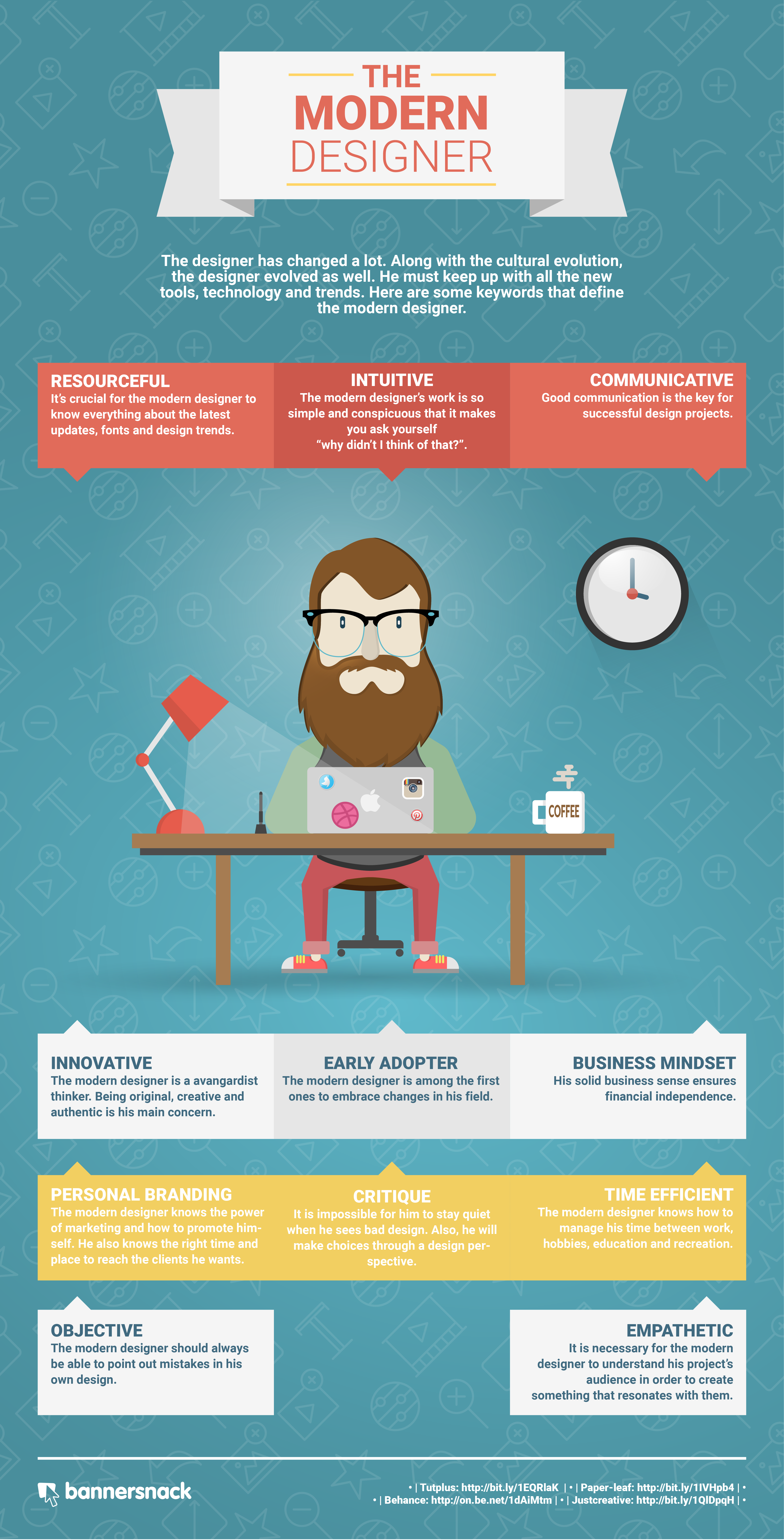