You are here: Home / Content Marketing / From Binge-Listening to Launching My Own Podcast

A few years ago I announced my Facebook friends that I will be going to start my very own podcast show.

Exactly: A podcast in an visual era, when everybody is rather eager to launch a YouTube channel, not an audio show. It didn’t matter to me. I recorded my first 5 episodes, published the first 3 and shared them with my friends. Everything went very well.

People around me got excited about it, I was excited as well to have had some awesome guests and also because it was something new for me and my community.

Since then, I managed to publish around 49 long form episodes where I interviewed people from the marketing industry, music celebrities, TV celebrities, online influencers and other professionals. We’ve talked around 25 – 45 minutes and sometimes we even got to a full hour show. Every time I got to share an episode, I was focusing on the downloads, I have counted the social media shares and likes, the clicks and everything else that I deemed to be important.

But then, I have noticed something interesting.

There are two kinds of peoples that are listening to my podcast show:

This is where I wanted to get to: to binge listening.

It is a popular topic these days. However, I first heard about it when somebody talked about tv shows, movies and other video content they watched hours and hours, and it was called binge watching.

But today the “binge” type of consuming the content it has evolved and encompasses many types of activities such as the following: binge watching, binge listening, binge eating, binge drinking and the list can go on and on and on.

Today, however, we’re going to stop and reflect on these two types alone: binge watching and binge listening.

At the beginning it was binge-watching…

We all want to have that kind of a weekend when we just sit down on the couch, get to the “My list” section on Netflix and click the first series of episodes we just can’t wait to watch. It is the kind of weekend when you don’t have to clean up your house, you do not have to go shopping or do whatever you have to do. Your target for this specific weekend is to finish the entire season of House of Cards, Game of Thrones or the Orange is the new Black.

According to a dictionary called Google (haha) – Binge watching is the practice of watching multiple episodes of a television programme in rapid succession, typically by means of DVDs or digital streaming. 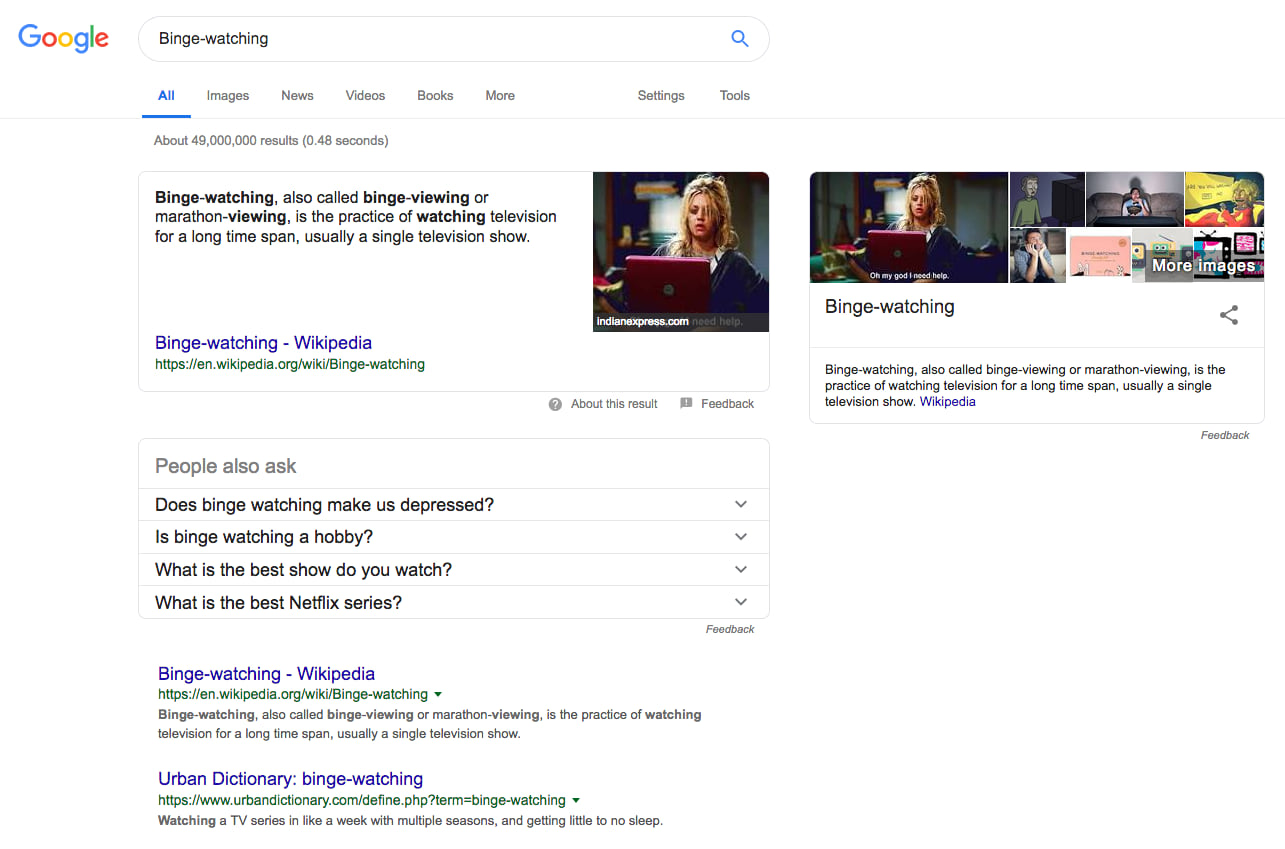 And let’s be honest, there are moments in our life when we just need these binge watching moments.

We just want to escape our daily tasks and problems, to call in sick at the office and relax at home and do nothing more than binge watch on Netflix or other similar networks. It is that kind of a day when we just want to shut down all our social media channels in order to close our contacts and engage in leisure activities such as binge watching.

Sometimes, we are doing it when we are tired or even when we have a burned out. We just want to stay at home, look at a screen and to not think about anything else. Right?

However, the big problem with this “therapy” is that after the weekend passes, we feel guilty. We think about all the important things we could have done. We go to the office and we hear all the cool stories other colleagues share, all the things they have done during the weekend: camping, hiking, watching a basketball game, going to a picnic or just organizing and having a friends night in. And you, what about you? You’ve  just had a binge watching weekend.

There are pros and cons of binge-watching.

And let’s be honest, sometimes we just need a day or a weekend of binge watching. Even if we feel guilty about it. It’s just like having that Big Mac menu paired with a big Coke, fries and a desert.

And it’s exactly the same when it comes to binge watching.

You can have that weekend binge when you watch a tv show or just a few movies that you really wanted to see. If you want to stay healthy, however, you should try to make it once per 2 or 3 months, and not every weekend.

Then, however, binge listening came around

We, the people, found out that time is very important. We can’t get it back if it’s lost. So, that’s why we want to know how to use our time wisely.

We want to learn how we can optimize our time.

For example, I’m learning constantly how to optimize my time. This is why, every time when I’m doing something I want to know if I will do it fast, if it should be done in the first place and if I can do something in the meantime.

My personal story with binge listening

I’m the kind of guy who loves to wake up later on a Saturday morning, prepare a breakfast meal (some cereals and milk) and get back to bed only to hit the play button for a movie or tv show. Other times, I love to go and have a coffee with my friends and stay all day long just doing nothing.

However, after I married my wife, I learned that we have different perspectives for Saturdays. She just wants to wake up and start cleaning the house, go shopping and finish with all of these points before 2 a clock pm. This means that she has to wake up at 8 or 9 a clock in the morning.

Now think about the specific scenario when these 2 worlds collide under one roof. Exactly…

There was some fire and some flame.

Then, I came with a plan.

I came up with the pan to make a compromise. I told her that I can clean the entire house and she can also go to have a coffee with her friends, go for a walk or even just go outside and I will do everything on my own.

The only thing she must agree with, is that I won’t hear her if she will be at home because I will play my podcasts. So, I took my Airpods, made myself 2 expresso with some milk, grabbed the vacuum cleaner and started doing the cleaning. 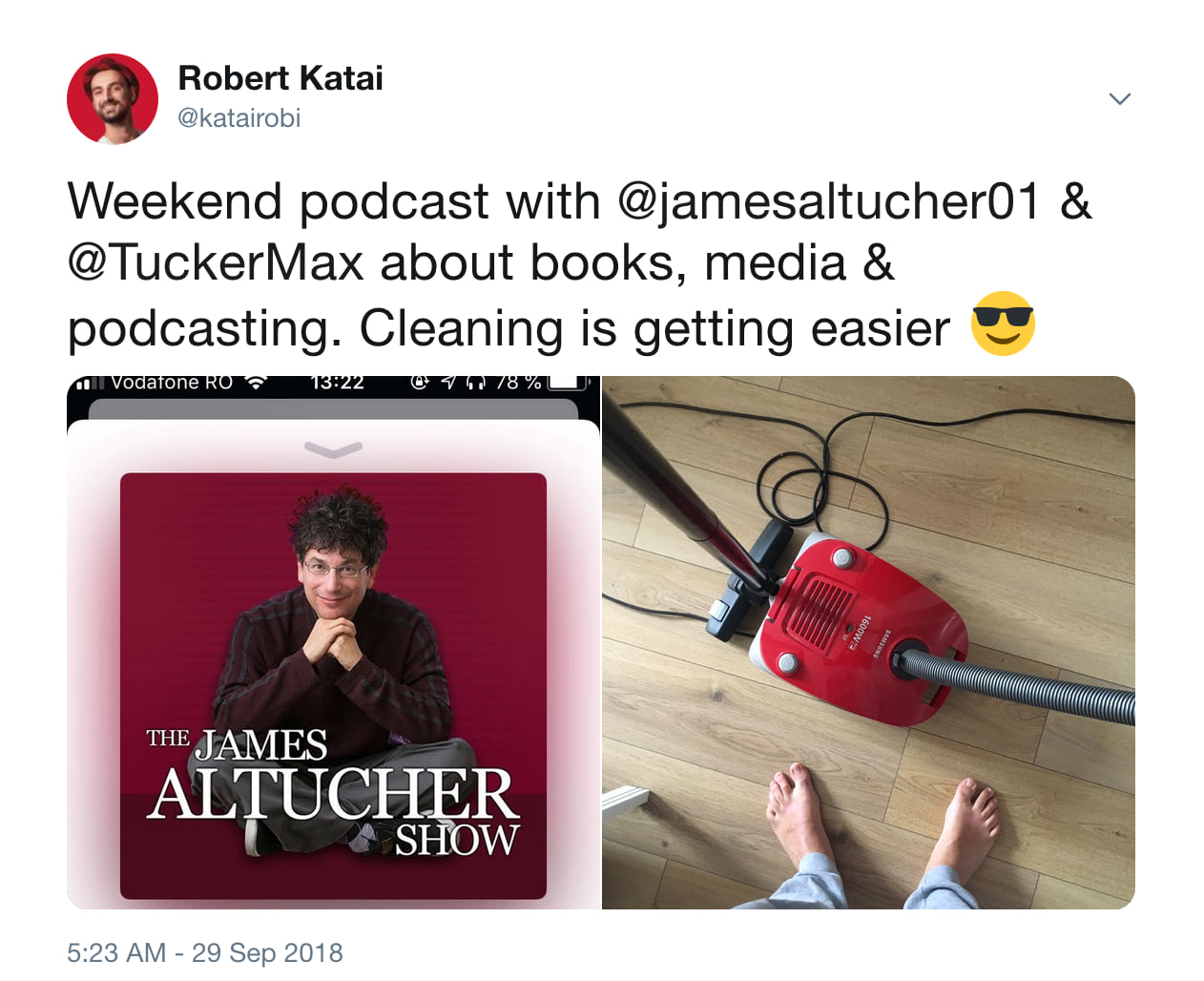 Man, I was so excited about it. Because I found the right time to listen my favorite episodes. I even planned my episodes every Friday, I have even planned to download them by Saturday morning  and play them while I was doing what every wife wants to see her husband doing…cleaning the house.

And I was the hero of this story.

However, this is not the ending here. And this is why, this compromise, got me some new ideas. Some new and crazy idea that got me thinking about a new project and later, about a new side project as well.

After 2 years of listening to podcasts while I was cleaning the entire house…exactly…the entire house: kitchen, bathroom, living room (You name it, I made it) I started my own podcast project.

And while I consumed for nearly 2 years this type of content, I eventually thought that here comes a time when I should do my own show. As a consequence, I launched and I published my own show. And, I managed to publish a new 1 hour episode twice a month, a new episode  where I managed to talk with several guests about topics related to marketing and life. 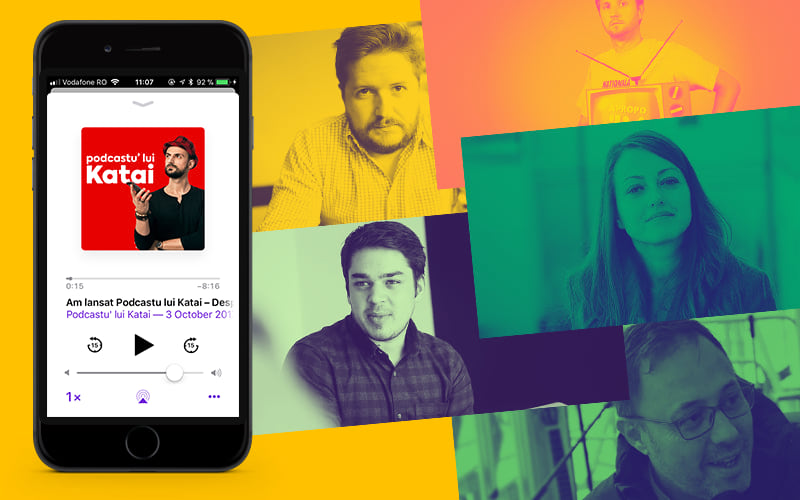 What’s the conclusion to this entire article?

What can we learn from this is that binge watching can lead to binge listening and sometimes it can get even better if we focus on the second one instead of the first one.

Because binge listening lets you passively consume the content, while with binge watching you have to be 100% focused in front of the screen. So, when you listen to a podcast, an interview, or an audio book, you can also do some laundry, clean the house, wash your car or go for a walk.